Armed for the Future

Polyurethane Armour for LARP and Cosplay by Red Dragon 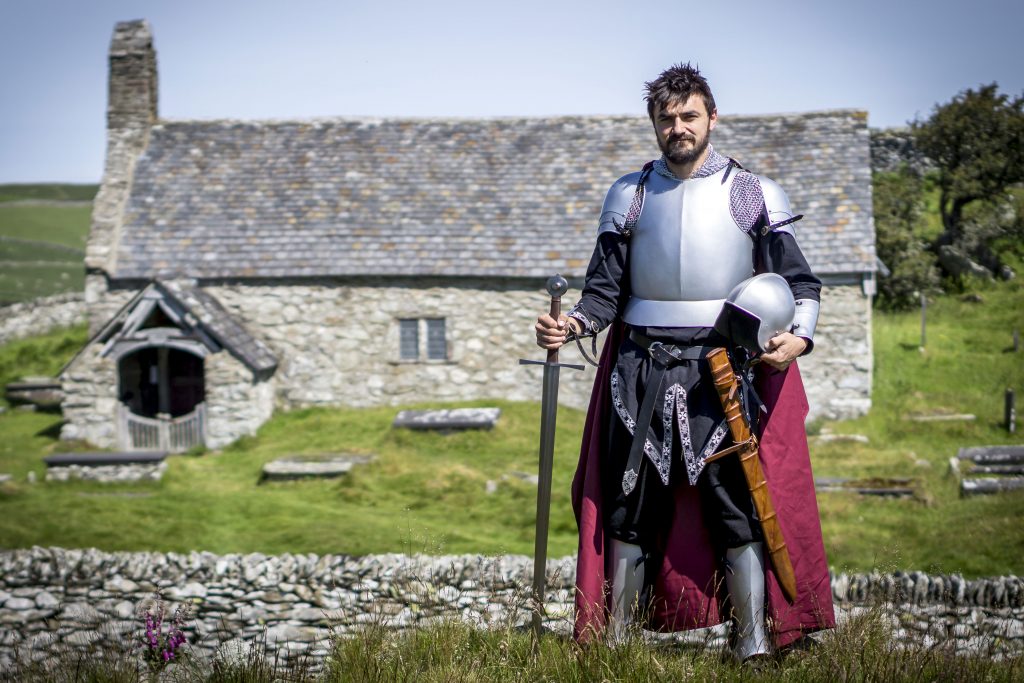 Let’s face it, when it comes to historical armour, few things offer greater protection than steel. The downsides of weight, inflexibility and the need for constant maintenance to protect against rust are more than offset by the superb protective qualities that it offers. However, in this day and age, unless you are on the re-enactment or SCA battlefield, you simply don’t need this level of protection that steel affords. The 21st century has seen many advances in plastic technology and these materials have now made their debut upon the world of historical armour!

To the eye, our range of polyurethane armours are near indistinguishable from their metallic counterparts. They are however much more comfortable to wear and can be worn for long periods of time without discomfort. Indeed, the flexible nature of this armour means that it can bend to the contours of your body in a way that rigid steel will not. Each part is typically a quarter of the weight of their steel equivalent, allowing for faster movement with less fatigue. Each piece is hand-painted with a durable acrylic finish and is detailed to look as realistic as possible. The maintenance-free finish will not rust like steel does and can be worn in all weathers. Adjustable leather straps and the flexible nature of the armour allow it to be comfortably worn by all but the largest of people.

Its versatile nature makes it perfect for a variety of uses such as LARP, Cosplay, Theatre, Medieval Banquets and Weddings. 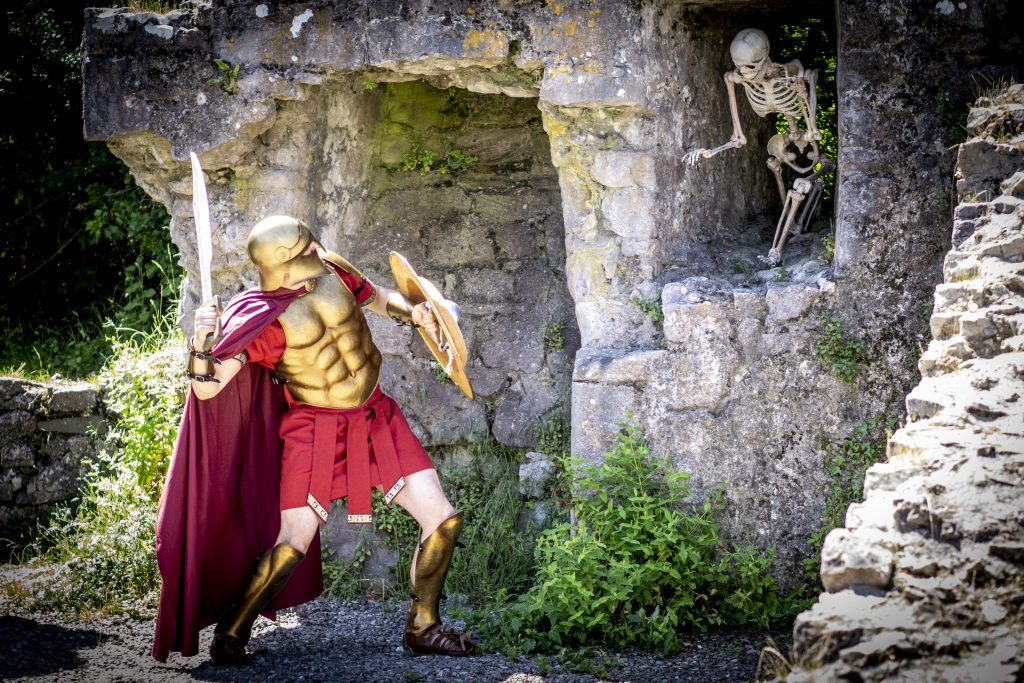 The Hoplites were citizen-soldiers of Ancient Greece. The name Hoplite comes from the name of the shield they used as soldiers. The Hoplites were mainly represented by ‘free’ citizens such as farmers and artisans, as they were the only ones able to afford the armour. Despite their lack of military training, the Hoplites made up the bulk of the Ancient Greek armies at the time. The use of the phalanx formation made the Hoplites effective in battle with fewer soldiers.

The upper-class Hoplites wore the full bronze armour including a bronze cuirass, helmet, greaves, and other pieces. The bronze armour could weigh up to 32kg. As well as their armour, the Hoplite armies were adorned with spears and shields as weapons. The equipment might well be passed down in families since it would have been expensive to manufacture.

Our Hoplite armour reflects that of the upper-class, with full bronze armour and a Corinthian-style helmet, which was the first standardised style of the Hoplite army helmet. 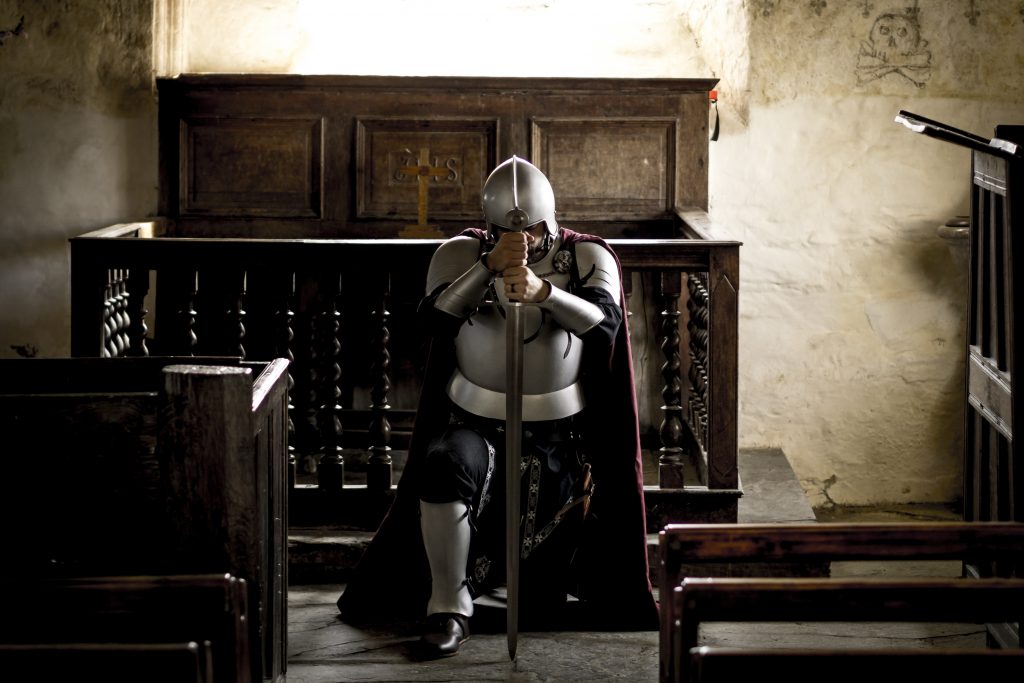 A ‘Knight Errant’ refers to a figure in Medieval chivalric literature who wanders the land looking for adventures to prove his virtue. The word ‘errant’ means “to wander” or “to rove”. The character of a Knight Errant is motivated by righting the wrongs of others and proving his worth.

The character of the wandering knight existed in romantic literature as it developed during the late 12th century. However, the term “Knight Errant” was to come later; its first usage occurs in the 14th-century poem ‘Sir Gawain and the Green Knight’.

Our Knight Errant armour reflects that of a typical Medieval knight armour with sallet helmet and simple metallic finish. 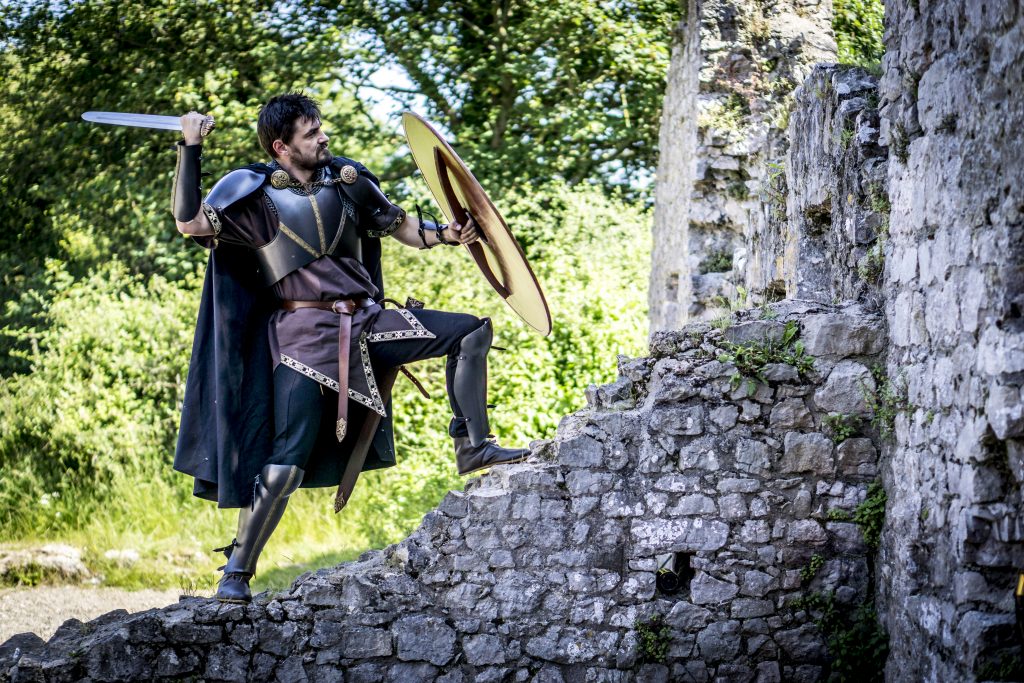 A Huscarl or Housecarl, literally meaning ‘houseman’, was a household troop in personal service to a Scandinavian lord or king – the equivalent of a modern-day bodyguard.

These elite warriors of the Dark Ages also had a place within the English military. They were founded by Canute the Great in the early 11th century. The highly trained soldiers served King Canute as his personal army.

Each Huscarl was asked to provide their own equipment such as a mail shirt, conical helmet, shield, sword, spear, and an axe. For this reason, the Huscarls were formed of wealthy men that could afford to make this high grade of equipment and weapons. Their sword hilts and axe blades were famously gilded with gold, a symbol of their elite status as warriors.

Our LARP armour is also adorned with this gold trim, as a recognisable symbol of the Huscarl. The helmet is a traditional Anglo-Saxon nasal helm. 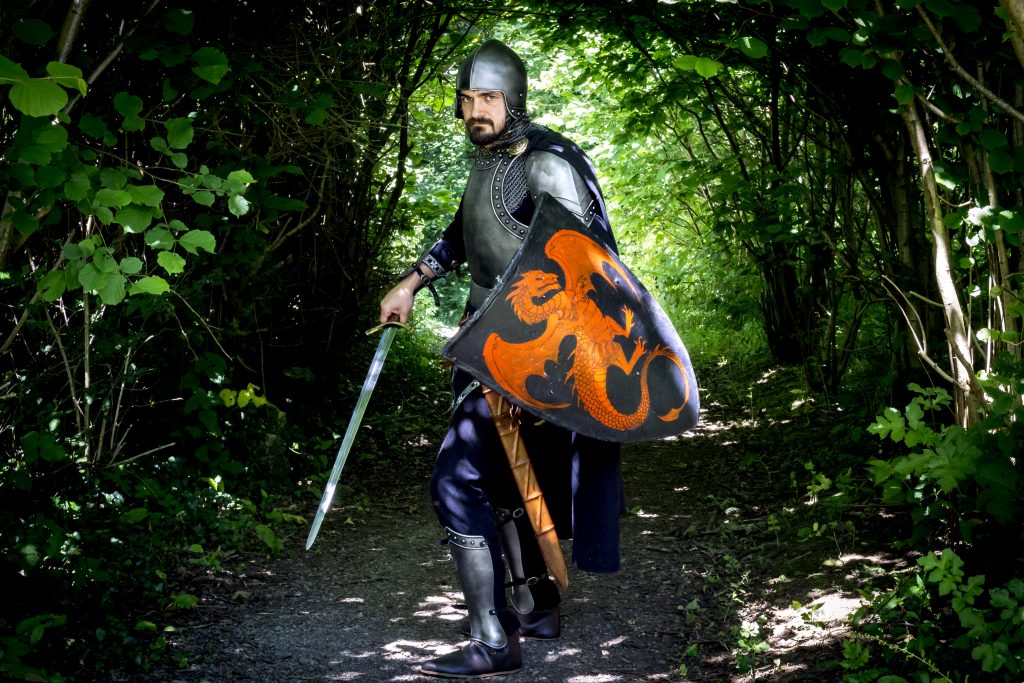 The Dark Sentinel armour is closely related to a Medieval knights armour but is based on the fictional character, The Dark Sentinel. The Dark Sentinel stands to watch as Midnight approaches. Ready to stand firm against the terrors of the night. He watches, he waits, his darkened armour, dulled to prevent reflection.

The dark alter ego of our Knight Errant, the Dark Sentinel does not seek adventure but waits for the terrors of the night to find him. This knight does not live in fairytales but in nightmares. 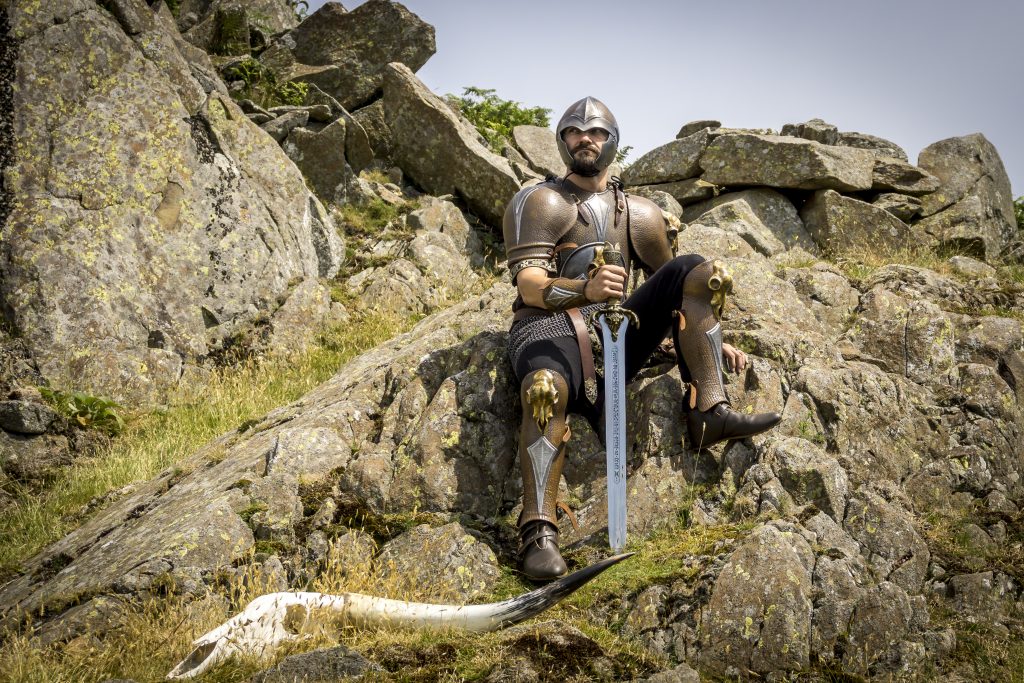 They say there is a fine line between bravery and insanity… the Dragonslayer embodies both in equal measure. He is a rare breed, completely fearless and unyielding in the face of the unparalleled dangers that would terrify all but the bravest of warriors.

His armour, crafted in a forgotten age, is a combination of archaic steel and dragon skin, decorated with skull talismans to bring him good fortune in the conflicts that lay ahead. 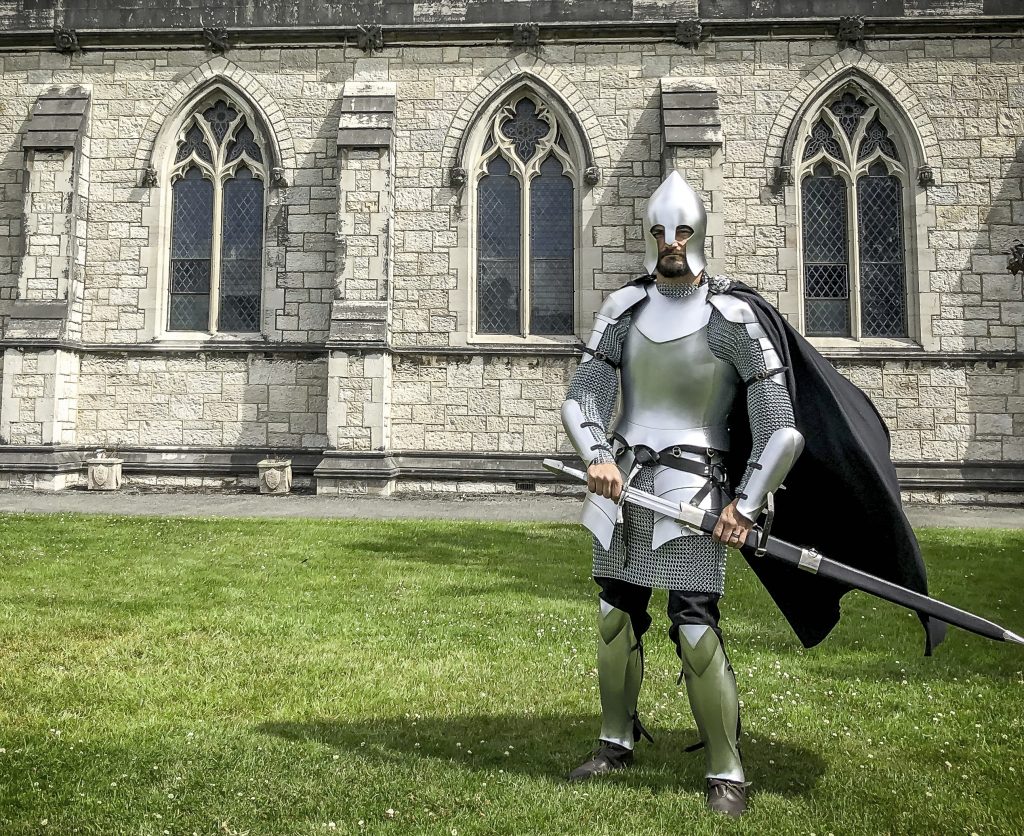 Only a distinguished veteran, proven on the battlefield of countless wars, can earn his place amongst the elite Citadel Guard. Should the walls ever fall, these formidable warriors shall stand steadfast, the last line of defence of the kingdom.

They don the finest plate armours, forged by the imperial smiths to keep their wearers safe from the innumerable perils they are destined to face. 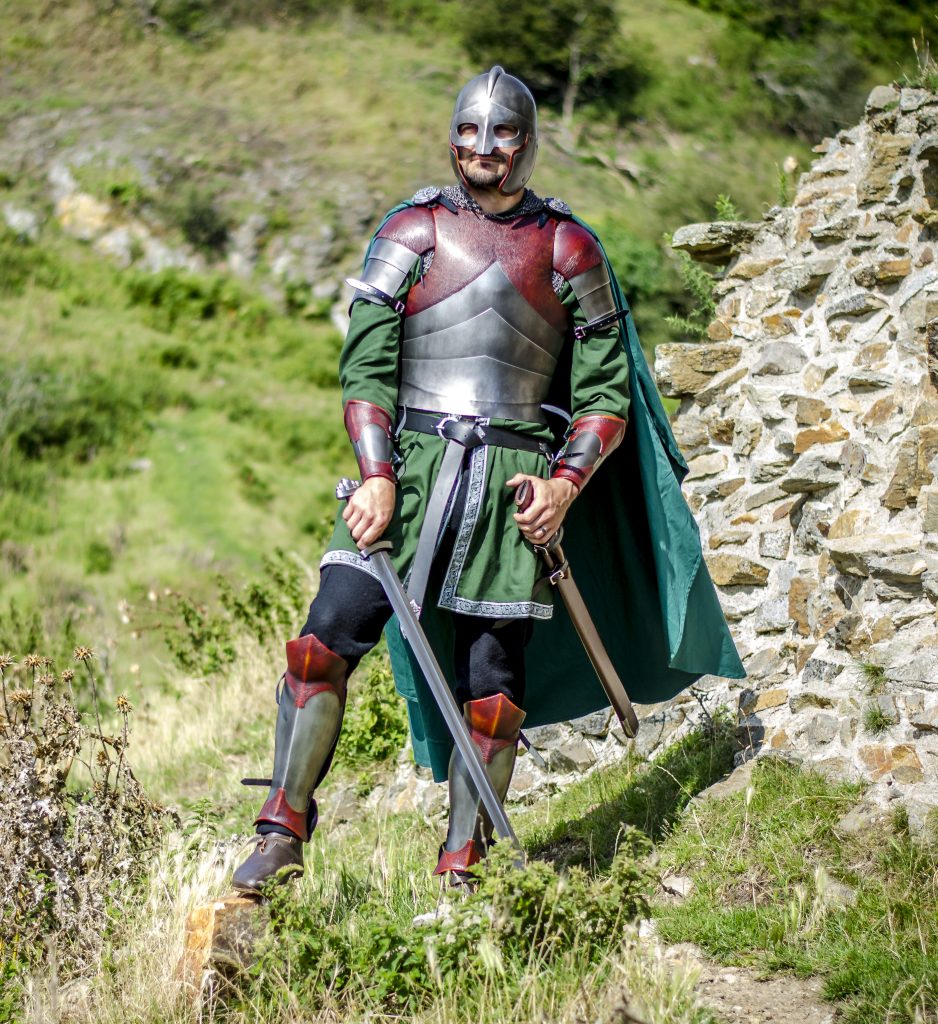 The Horse Lord seeks neither wealth nor power. He lives only for the death or glory that await him on the battlefield. Riding knee to knee with his brethren, their legendary charge destroys all that stands before it.

His armour, crafted from a mixture of steel and leather, is light yet durable and is unchanged since the time of his forebears.
Adorn yourself with the armour of the future here!